Hirotaka*, a Gamelan specialist from Japan, drives all the way from Los Angeles. each week to teach our students as part of the Center for World Music’s program to bring music to schools and foster intercultural awareness through in-depth encounters with the world’s performing arts traditions.  Last Friday’s end of term presentation featured 7th grade students playing with Hirotaka, who gave an introduction to the audience about the important and sacred cultural significance of Gamelan in Bali. Our students followed tradition by removing their shoes and stepping carefully around — not over — the instruments. The bronze drums, pots, and instruments are hand carved and brightly painted gold to echo the lively music, and were beautiful to see. It was also enthralling to watch how intently focused our students were with their eyes and their ears : on Hirotaka and the drum cues he was using to lead the group; on their own individual playing (strikes and mutes); and on their classmates’ playing to stay in sync – like a small symphony. This was true teamwork in action, and a demonstration of music as a universal language! 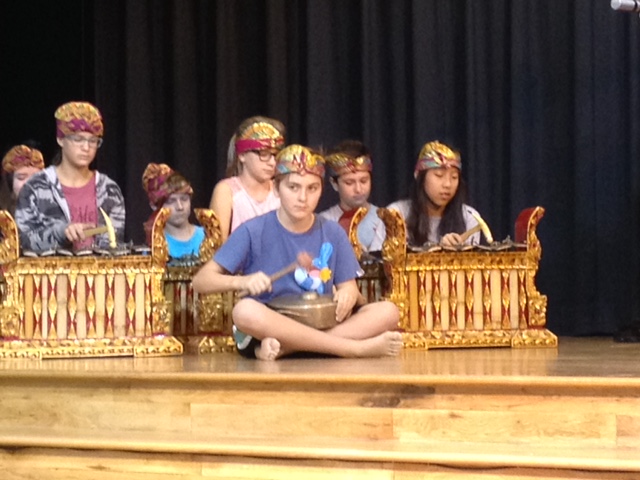 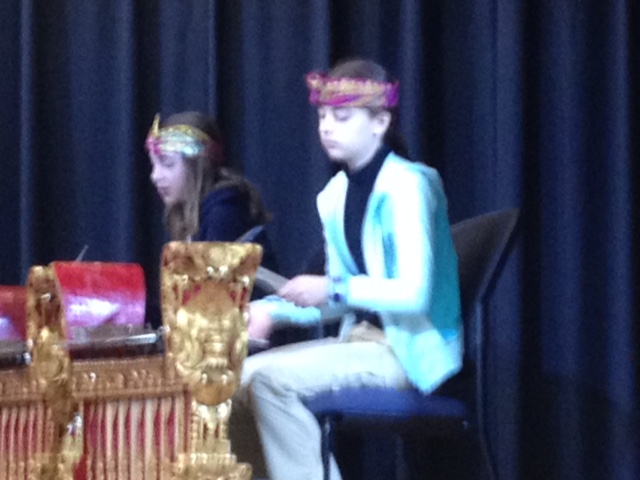 *Hirotaka Inuzuka teaches and performs Indonesian gamelan music. Hiro began studying Balinese gamelan during his undergraduate studies in Ethnomusicology at UCLA; he continued to deepen his knowledge of Indonesian music and dance at California Institute of the Arts, under the mentorship of I Nyoman Wenten, where he earned his MFA in WorldMusic Performance. He continues to travel to Bali regularly, to expand his expertise and study with Bali’s most renowned artists and teachers. Currently he is a prominent member of many gamelan groups in the greater Los Angeles area, such as Burat Wangi,Pandan Arum, and Bhuwana Kumala. He has performed in The United States, Japan, and Bali, participating in events such as Pesta Kesenian Bali (Bali Arts Festival), Bali Mandara Mahalango, and Performing Indonesia at the Smithsonian Institute. He has taught gamelan privately, as well as at workshops and community classes in Southern California, including the “Music of Bali” series at ArtShare LA in 2014, and at Glendale Community College in 2015. In 2014, he established Sekaa Gambuh Los Angeles, a group dedicated to playing the music of Gambuh dance drama, one of the oldest surviving Balinese dance forms, which is facing extinction due to Bali’s modernization. With his focus on teaching and performing gamelan music, he has opened his own community gamelan studio in Tujunga, California, where he teaches and trains new players, in order to further the preservation and performance of gamelan music in North America.