Each year, SDFAS students partner with “I Love A Clean San Diego,” San Diego’s most influential advocate for sustainability and environmental education. For the 2nd consecutive year, students adopted Windansea Beach as our targeted annual beach clean-up. The Adopt-A-Beach program is not just about trash.  It’s about the need for clean oceans, shorelines, and waterways.  It is about Californians acting together to create lasting solutions to marine pollution.  The harmful effects of marine debris are severe: negative economic and aesthetic impacts, harm and risk to human health and safety, injury and death to animals through entanglement and ingestion, and habitat destruction.

This afternoon, the 7th grade class worked together to scavenge the shores for non-organic waste, recyclables, and man-made debris. The students did a fantastic job fulfilling their civic duty by cleaning and caring for their local environment. 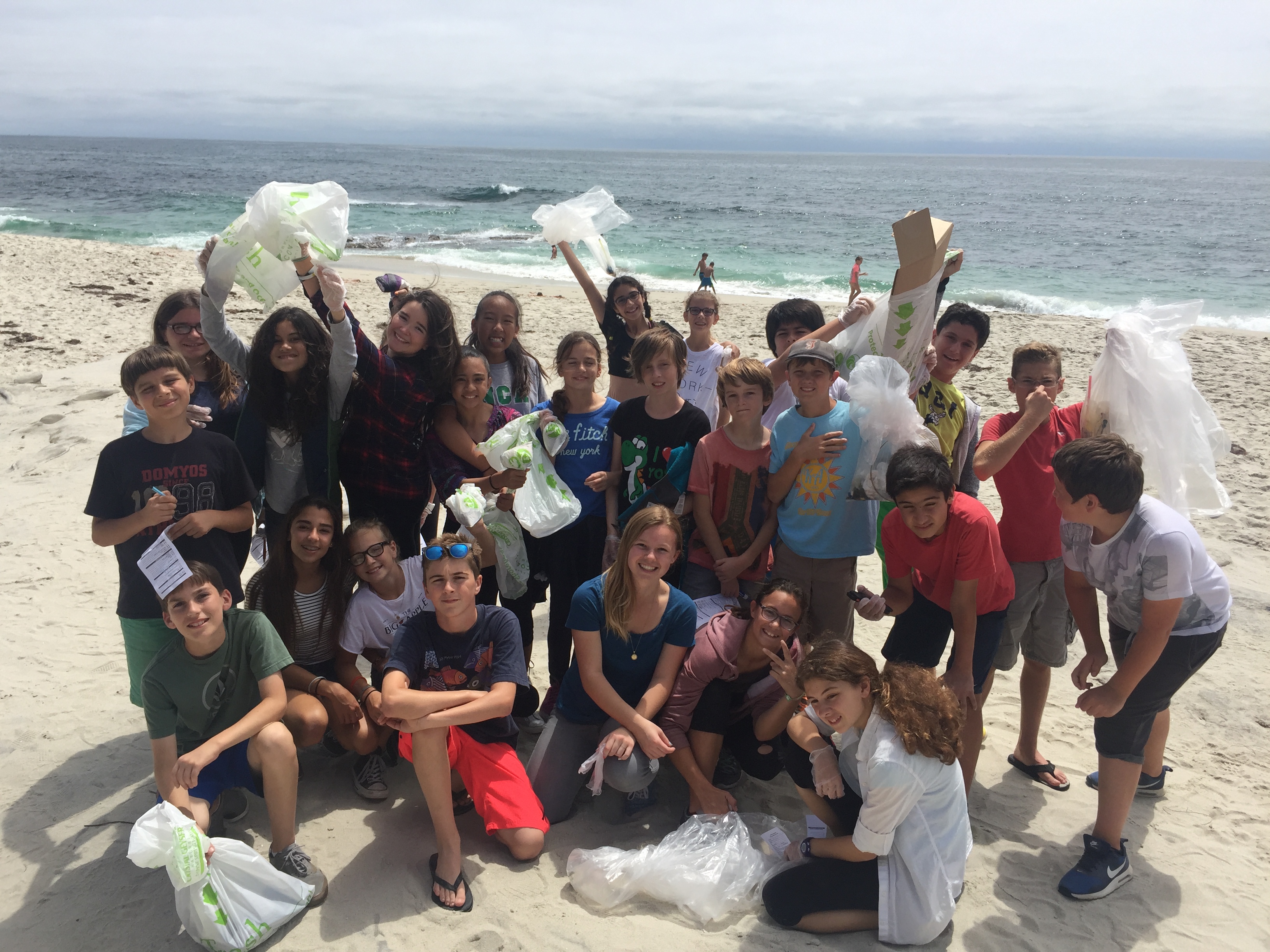 It was a beautiful day today for the group as, against all odds, no rain disturbed the plan, but sunshine helped for the kayak trip!

The day has been full of fulfilling experience and friendship: kayak and cycling in the Laurentides, joined by former SDFAS student Nicolas Leblanc, shopping in old Montreal (a moment students had been waiting for), pizza diner with another long time friend, Christopher who was in Kinder with some students and was still in touch!

The group went to see the documentary “Demain”, a big success in France for a film in that category:

According to the chaperons, students enjoy the trip very much so far and become more independent and responsible every day!

The students have really enjoyed their first day!

This morning, they visited Montréal during three hours, and the tour included Mont Royal. The weather was nice and the group even enjoyed lunch outside. Then they went to Radio Canada to see the studios and record a program (A video will come later).

They still had energy to spend on a laser tag game later in the day, before tasting the famous Poutine, a typical dish in Montreal.

Tomorrow, the kayak trip will depend on the weather forecast…

Slide show (it may take some time to load):

This is the big day we have all been waiting for: le voyage au Canada!

All students and their teachers left this morning from the campus at 7am and are on their way to Los Angeles airport to take their flight to Montreal, on Air Canada of course!

Stay tuned for more information on the MS blog!

The students had a very successful second day at their inaugural JMUN conference. They worked with other countries’ delegates to draft and debate resolutions in response to  an international “crisis” given by the Secretaries-General.

In the afternoon, the entire conference attended the awards and closing ceremonies. Dylan Cardinal, representing Lithuania on the Regional Security Council, was awarded one of three Outstanding Delegate awards by her committee chairs; the awards recognize the delegates who demonstrate a depth of  knowledge and insight into the committee’s topics. She was also awarded the gavel which is given to the delegate who displays diplomatic skill above and beyond what the committee expects. All of the SDFAS delegates said they truly enjoyed the conference experience. A great first year for the team and looking forward to next year!

Additionally, each year at the Junior Olympics, each school is invited to choose 4 girls and 4 boys to race in the 4 x 100m relay races. The relay consists of one 8 year old, one 9 year old, one 10 year old and one 11 year old. This year, for the first time, BOTH the girls and boys relay teams placed 3rd out of 8 schools, and they were all awarded the bronze medal. Congratulations to Marie Rebeiz, Elisabeth Madany , Ella Schuppek , and Tahlia Zadeyan for being the first girls relay team in school history to place in the top 3! And to Aidan Des Rosiers – Kutchuk, Titouan Ferton, Nicola Redon, and Paul Madany for representing the boys! Bravo to our relay teams!

At the end of the day, each school sends their fastest runner to compete in a 400 meter race for the title of “Fastest Boy” and “Fastest Girl” in La Jolla.

This year for the girls, 4th grader Tahlia Zadeyan represented SDFAS and finished as the 5th fastest girl in La Jolla, an amazing accomplishment for such a young athlete. Good job, Tahlia!

For the “Fastest Boy”, 5th grader John Guckian raced a strong and strategic race. His focus and determination, coupled with his raw talent was no match for any other boy in La Jolla. John had a fast start, held a competitive pace throughout the race, and out sprinted all other runners during the last 100 meters… Giving him the 2016 title of “Fastest Boy In La Jolla” and winning the gold medal!  “San Diego French-American School, John Guckian, Fastest Boy in La Jolla 2016″will be engraved on a historical trophy with all past winners. What an monumental feat!

We spent our last morning at the Children’s Theatre today.

After breakfast we had one more show, presented by the Dallas International School High School English Students. It was a selection of scenes from famous playwrights: Molière, Shakespeare, Anouilh or Marivaux. The actors were excellent!

As our group had to leave earlier for the airport, we all went on stage and Lorraine Gachelin, coordinator of the Festival, made a short speech and gave each actor a medal, and a diploma. She also gave our school a trophy that we will keep as souvenir of La Troupe’s participation to the Festival 2016! It will be displayed in the showcase near the lunch area.

Above, you can see some pictures of this morning play by DIS High School students and from the Russian school we saw yesterday.

Pictures from the Award Ceremony and our trophy:

More From the Theatre Festival

Actors from La Troupe have enjoyed seeing the productions from other schools today.

This morning we saw “POTPOURRI #1” from Dallas International School, English Elective class, and at noon, “FATS3” from the San Francisco Middle School, all 8th grade students, in an improvisation piece.

At 1 pm, we saw the play in French from École Internationale de New York and the title was “L’Audition” , a play written by  the Middle School students.

This afternoon, they participate in a workshop with clowns, before seing the play in Russian with English subtitles!

The last play of the day at 7pm (5pm San Diego time) is by the French Theatre group of Dallas International School. “Game of Films” and “Le deuxième coup de feu”.

See some pictures of the other plays below:

La Troupe: Pictures from the Play in Dallas

It was a wonderful performance this morning by La Troupe! Every actor played its part with a lot of confidence and energy and the public the public’s reaction was laughter and cheers at the end of the performance!

This week, Mme Lecorgne organized a fieldtrip to Suzie’s Farm with 6th graders.

The main goal of this fieldtrip was to study the differences between organic and traditional farms.

The students were able to harvest beets, peas and radishes.