Tonight, the SDFAS Girls Varsity Basketball team made an unbelievable 2nd half comeback to win the league championship game against The Cambridge School. The team was trailing 8 -0 in the 1st half, before hustling to close the gap before half-time. Starting the 2nd half, the team was down 10-5, as they began to rally to get back in the game. The team continued to play with unparalleled intensity and heart, as they forced turnovers defensively, and converted steals into scoring opportunities. With 6:00 minutes remaining, Cambridge scored a basket making the score 15-12.  The girls answered with their trademarked “sauvage” full-court defense, as Adriana Telenti pressured Cambridge’s number one player, and was a catalyst to spark a 5-0 scoring run for SDFAS. With 4:33 remaining, Noella Coiquaud confidently drained a deep 3-point shot, followed by a 2 point lay-up to give SDFAS the lead, 15-17. Emma Lhuiller scored a key basket stretching the lead to 4 points (15-19), with 1:47 to play. The Cambridge School didn’t stop, and shot a long 2 pointer from the wing to stay in the game, 17-19. The girls controlled the ball for the last minute, drawing fouls, getting offensive rebounds, and securing the victory for the league championship title. Congratulations to Maxine Arambulo, Emilie Otterson, Amandine Brissot, Kimy Ghalie, Alienor Calmejane, Emma Lhuiller, Adriana Telenti, and Noella Coiquaud for making  school history by becoming the first basketball team to go undefeated AND win the league championship title. 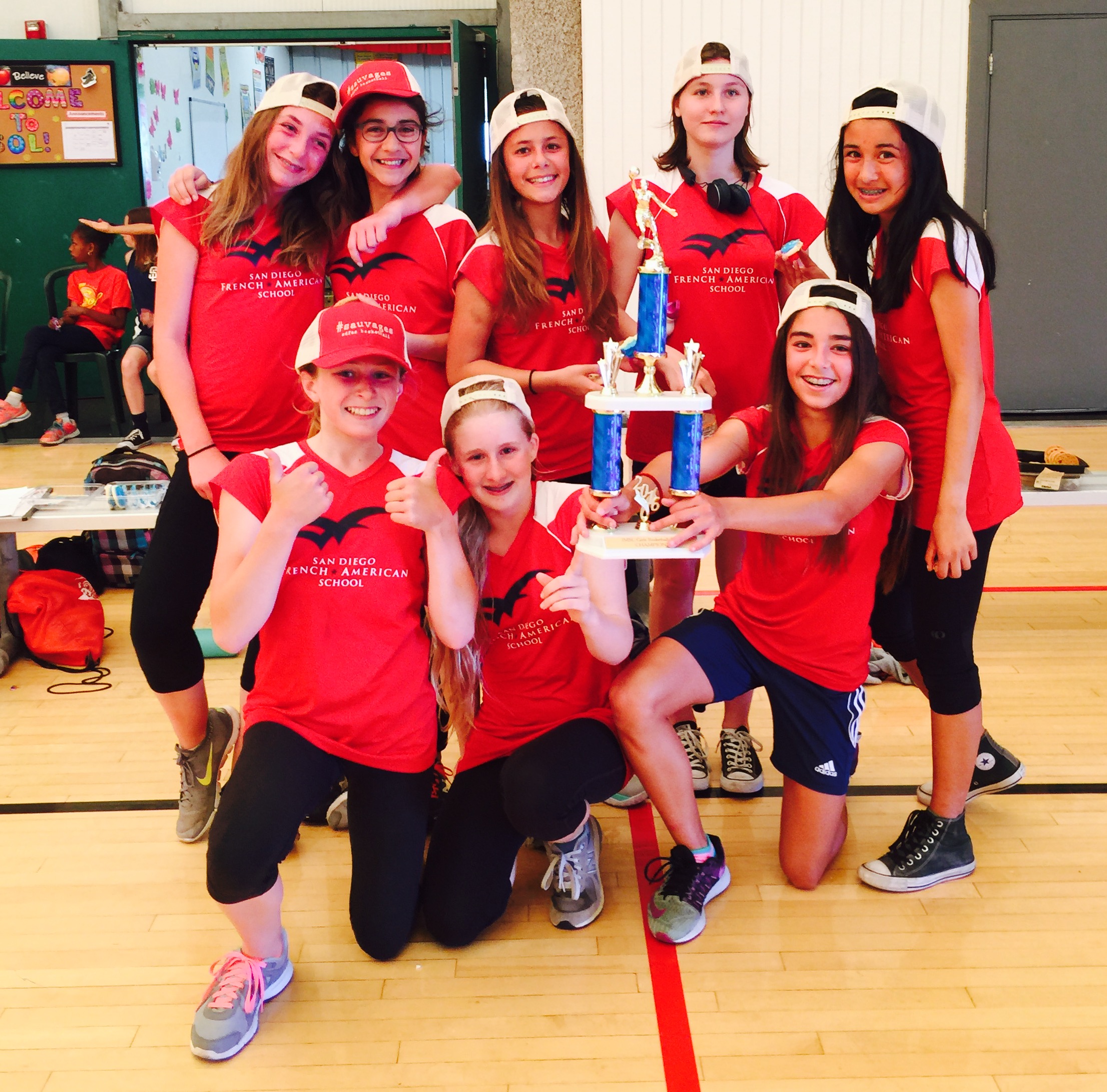 This afternoon, the SDFAS Girls Varsity Basketball team championed their way to victory in a tough semi-final game against Soille Hebrew Day. The team pushed through a grim first half, scoring only 5 points. Trailing 5 – 9 going into the second half, the girls brought up the intensity and refocused their A-game. With 8:00 minutes remaining in the second half, SDFAS took the lead 16 – 15 and never looked back. The team played true to their trademark “sauvages” defense and executed fundamental team play to secure the win, 18 – 15. The team will play in the league championship game this Thursday against The Cambridge School.

The girls basketball team is off to a commendable start!

It was a pleasure to see the team play this week. They managed to do very well on Tuesday, despite facing a very strong team and being largely outnumbered. Thursday’s victory is well deserved, thanks to motivated and well organized players, and a very tactical training by our amazing coach!

Bravo and keep it up!

Pictures I took at the game yesterday:

Today, the SDFAS girls and boys cross-country teams had their second meet at La Jolla Shores. The race was 1.5 miles long, with 7 middle schools represented, and over 80 runners!

Maxine Arambulo (8th grade) led the way for the girls, coming in second place out of 38 runners and was awarded the silver medal (7th/8th division)! Adriana Telenti (7th grade) and Chloe Gross (6th grade) finished in the top 10, and placed 3rd in their respective age divisions. Amazing! As a team, the girls ran strong and stole FIRST PLACE from Encinitas Country Day by 5 points!

On the boys side, Robin Nicoli ran an unbelievable race, finishing in FIRST PLACE out of 43 boys. This was the first time a SDFAS boy finished first in history! Bravo, Robin! The boys were also led by Georges Perbost and Tristan Cousin, who both finished in the top 15. The boys team placed 2nd overall, the best finish in over 2 seasons!

Cross-Country: No half time, no time-outs, no substitutions, no excuses. They are not just runners.They are machines.

This week, the girls and boys Cross-Country teams competed in their first race of the season at San Dieguito Park!
8 middle schools raced over 80 runners in a 1.8 mile course through park trails.
The girls finished in 3rd Place overall, and were lead by Maxine Arambulo, Chloe Gross, Lexine Arambulo, Emma Berman, Elena Miralles, Sofia Berman, and Saliha Choma.
Georges Perbost, Tristan Cousin, Sebastian Altomare, Zachary Walker, Emil Belhon, and Nicola Redon represented the boys.
The next meet is this Monday, September 28th at La Jolla Shores… Come cheer on our Stingrays as they race on the beach! Race starts at 4:00 pm!